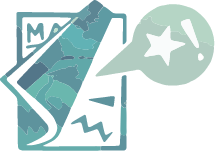 To create mass visibility in London and to celebrate this show's iconic birthday in the West End, we wanted to find ways to profile the show both on the high street and around key London landmarks in order to reach a huge number Londoners and tourists alike, to create a real buzz and talkability about this award-winning production.

To mark this 10 year milestone we had to pull off one of our most ambition and wide-ranging campaigns ever, these were some of the highlights:

We ‘turned London green’ by covering some of the city’s most famous landmarks in green lighting and show branding on the anniversary of the 10th birthday including Marble Arch, the Tate Modern and the Tower of London.

In partnership with ASOS we launched two Wicked-themed clothing collections.  This campaign saw ASOS editors curate a collection of key fashion items and accessories that played on the Glinda and Elphaba character looks, to create ‘Good Witch’ and ‘Wicked Witch’ collections. Using a contrasting colour palette of greens and pinks, we reflected the two lead characters though selecting eye-catching and seasonal clothing and accessories.

We organised an exclusive post-anniversary gala at London’s iconic gallery, The Tate.

Ripley’s Believe It Or Not x Wicked:

We partnered with the famous London tourist hotspot to create ‘Ripley’s Wicked Halloween Week’. For one week in October, Ripley’s was illuminated in witch-green, and their library gallery exhibited costumes and props labelled with unbelievable facts. Other activity included face painting, balloon making, Wicked merchandise and a Wicked themed treasure hunt through the building.

We created a limited-edition Lucy Choi footwear collection which went on to be worn by celebrities and secure national coverage on shows like Strictly Come Dancing.  Lucy Choi herself designed and launched the range of shoes celebrating Wicked’s heroes, Glinda the Good Witch and Elphaba the Wicked Witch. This was stocked at Harvey Nichols, Selfridges and Net a Porter, as well as the Lucy Choi Mayfair store and promoted extensively through all the channels at their disposal.

We secured a sparkly cover wrap on the UK’s most widely distributed daily newspaper, which went out to 33,000 commuters.

As well as a host of exclusive 10th anniversary competitions, promotions and giveaways.

Take a look at some of the highlight of the 10th birthday celebrations here: